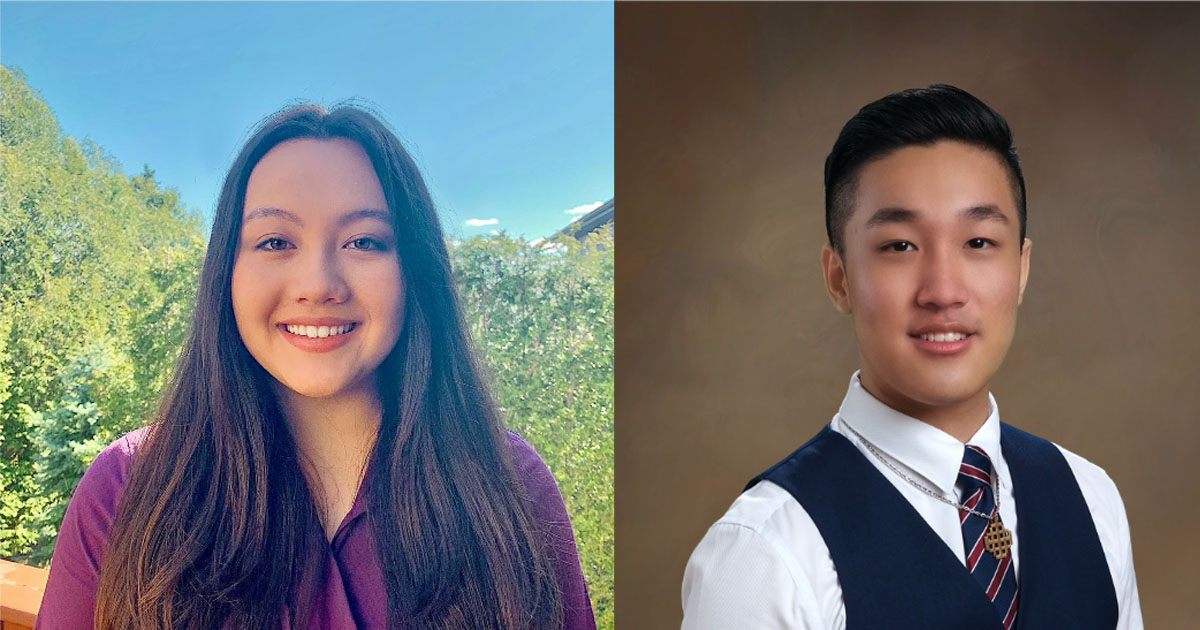 The Bachelor of Health Sciences Program extends our congratulations to Jazlyn McGuinty and Calvin Sun for their first-place win at the 2021 Project SPARC Research Competition, hosted by the McGill Student Association of Physical Education and Kinesiology (SAPEK). The two first-year Bachelor of Health Sciences’ students were also awarded the SAPEK's Choice Award for favourite presenters.

This three-round competition allows undergraduate students to propose research within the fields of exercise and health science. The national competition was held virtually this year, with teams competing from universities across Ontario, Quebec, and the United States. As first-year students, Calvin and Jazlyn were the youngest finalists of the competition, with all of the other teams consisting of upper-year university students.

The research question that teams were tasked with addressing this year for the Project SPARC competition was “What are the effects of the implementation of COVID-19 restrictions and/or being diagnosed with COVID-19 on health via increased sedentarism?”

Each team’s role was to analyze the COVID-Sedentary relationship, identify an associated health risk using a selected discipline of either biomechanics/rehabilitation, motor development/control, physiology, or psychology, and propose a research project which includes an intervention that may mitigate the negative health effects associated with sedentarism.

“I personally found the research question this year to be a really fascinating one and something extremely relevant to current circumstances and thought that it was something that I would be extremely interested in exploring,” says Sun.

Sun and McGuinty’s approach combined a health sciences method along with a public health foundation by proposing a retrospective population-based analysis of the incidence rate and prevalence rate of the most common sedentary behaviour-influenced motor function diseases and their clinical visit frequencies pre- and post-COVID-19 lockdown.

“The outcomes of this study could provide direction for future health policy planning, such as the potential inclusion of gyms and recreation services as essential services, as well as to inform targeted approaches to mitigate motor health risks for specific age groups,” says McGuinty.

McGuinty and Sun initially connected with each other through one of their core BHSc courses, PHGY 170 Human Cell Physiology, where they were assigned to the same discussion group and collaborated on course content and group assignments each week.

“Our collaboration outside of the classroom began when Jazlyn invited me to participate in a different case competition, leading to us collaborating more regularly on various academic projects,” says Sun. In early February, Sun discovered Project SPARC through an email that was sent out to students from the Department of Biology about the annual national competition for undergraduate students.

“Participants were encouraged to sign up in pairs, and I immediately knew that I wanted to reach out to Jazlyn because we had worked so well together in our previous collaborations,” explains Sun.

Despite their success, collaborating virtually has come with its challenge. In fact, Sun and McGuinty have never met in person, as they currently reside in different provinces.

“I initially found it difficult to reach out to peers whom I had never met beyond the classroom setting,” says McGuinty. Her advice for those studying in an online environment? “Take the time to virtually connect with those around you beyond your mandatory meetings. I’m so glad that I reached out to Calvin when I did, because, without that, we may have never ended up partaking in this competition together.”

“This experience has definitely taught us how to work and communicate effectively through virtual platforms,” adds Sun.

McGuinty and Sun also knew that they would be up against very qualified and experienced teams in the competition, especially as they were going into the final round.

“Initially, we were quite intimidated, but we continued to remind one another to focus less energy on our competitors and more on improving our own project,” says McGuinty. “My advice to current and future BHSc students is to work on bettering yourself rather than comparing yourself to others. This will not only take the pressure off and make the process more enjoyable, but also allow you to tap further into your creativity without distractions to produce the best result possible.”

“Whenever we found ourselves beginning to feel doubtful, I think that we had the right mentality by always telling ourselves that we were going to try our absolute best, and no matter the outcome, we would be proud of our hard work and getting this experience,” adds Sun.

McGuinty and Sun certainly have a lot to be proud of.

“Having two first year students compete and win against upper years in this type of competition is indeed quite remarkable!” says Dr. Michael Adams, Director of the Bachelor of Health Sciences program. “We want to thank Calvin and Jazlyn profusely for representing us so very well at this national/international level competition. Indeed, this kind of achievement bodes very well for their future careers.”

“We wished to share this news with the faculty and BHSC program at Queen's as it reflects our program’s strengths, successes, and achievements,” says McGuinty. “We believe that the BHSc program significantly helped us to prepare for this competition.”